In 1992 Søren Gønge decided to start his own business after working for a number of years for among others TNT & UPS. He wanted to bring a business into the world that was truly dedicated to quality and reliability. Out of this idea DANX was born – D ay A nd N ight X press – DANX!

Shortly hereafter it became clear that particularly in-night distribution required such high standards in quality and reliability that a dedicated focus on just one product was necessary. DANX is a true pioneer and became the first in-night provider in Denmark.

The founder of DANX, Søren Gønge says that “with the possibility of in-night distribution directly from Holland, Germany and Sweden it gave some of our customers a drastically improved availability of spare parts without large investments in local warehouses. My personal goal is and was 100% on time”, Søren continues “and I quickly found customers with demanding service obligations that appreciated our 100% accuracy in logistics.”

In 2003 Bob Thorhauge joined DANX as major shareholder with a focus on sales and business development. Bob also had a strategy that DANX should extend its focus from in-night distribution to service logistics in the Nordics. “I had previously used DANX as subcontractor and was impressed by the exceptionally high quality and dedication by Søren Gønge and his staff. In case of delays Søren would get up at three in the middle of the night and deliver the parcels himself – he would do anything to keep his promises”.

Søren’s promise of 100% accuracy and outstanding quality paired with Bob’s Nordic experience and international network of contacts were the perfect starting point for DANX to go Nordic.

DANX’s core business is in-night deliveries. In the Nordic and Baltic area we deliver into the boot of more than 6000 service vans. 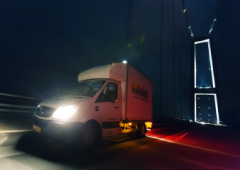